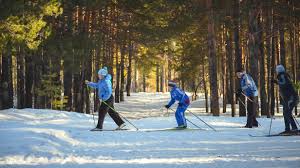 In Finland we have thousands of kilometres of different trails and paths for everyone to use for recreational purposes. In the summer these trails are really meant for everyone: people who walk, jog, walk their dogs, do Nordic walking etc. Also cyclists can come along as long as they are aware that there are other people using the same trails they are, and don't cause any danger. In short: in the summer there are lots of people on these trails and things seem to work out just fine.

In the winter it's a whole different story. You see, a new phenomenon has emerged in our country in recent years. It's called laturaivo in Finnish, and it refers to situations where a cross-country skier has become absolutely enraged to somebody else on the same ski trail -or close to it.

First some cross-country skiers just got mad at people who were walking on ski trails. They said that walking on the ski trails ruins them, and then it is difficult or even dangerous to ski on bumpy trails. Okay; I can understand that. But, this is by no means the only thing skiers became upset. Even if there was someone walking a dog alongside the ski trail, this was also wrong, and the poor dog owner was often told to 'go away' or even to 'f*** off'. I've been one of those dog owners, so I know what I'm talking about.

Well, things have gotten worse over the past few years, and this winter I've read about several cases where skiers have said very nasty things also to other skiers (!) So now it isn't enough that cross-country skiers have banished other people off 'their' trails; now they can't even stand each other?! According to newspaper articles, slower skiers (elderly people, children) have received some very negative feedback from super-skiers, and for example if someone has fallen over, he/she has been told to get out of the way and the message has been accompanied by a bunch of nasty swear words. In some cases, the one laying on the ground has even been spat at or stung with a sharp ski pole by someone passing them!

I don't know if this kind of behaviour says more about cross-country skiers or our times, but it's ludicrous and bad behaviour anyhow. It's also saddening to think of how little some people respect others and their right to exist, think or do things differently. Live and let live is an excellent principle, and it wouldn't hurt to bear this in mind whatever we do. People with a one track mind are always problematic to live with, and selfish people with a one track mind are even worse.

And besides, even though I don't ski myself (in any shape or form), somehow I thought that skiing was supposed to be fun?  Hobbies and recreational activities are intended to help you relax, calm down and feel good. I say, if cross-country skiing makes somebody so enraged that they need to yell, swear and rage to others, maybe it would be wise for them to change into some other sport or hobby altogether. Like needlepoint. If something goes wrong there, they can only blame themselves.

Visits to the site