My family and I visited Tallinn during our summer vacation. Many Finns go to Tallinn for a very spesific reason: to get their nails done, to go to a hairdresser or to buy a new pair of specs, just to mention a few. The reason for this is the fact that for instance these things and services are cheaper in Estonia than they are in Finland. Finns also have a questionable reputation for exporting huge quantities of cheap alcohol from Tallinn to Finland, which has caused queues and  traffic congestions in the port of Tallinn. The scale of this alcohol traffic is so large that the Finnish authorities have been trying to find ways to reduce it.

Anyhow, all of this has led to the unfortunate situation that many Finns don't really see Tallinn as a cultural capital that has a lot to offer. For instance, there are many fine restaurants in Tallinn, and different forms of arts and crafts have long traditions in Estonia. We for instance went for a coffee in
Maiasmokk (which means sweet tooth in English), which is the oldest operating café in Tallinn and entire Estonia. It has been open at the same location already since 1864. It offers a large variety of different kind of pies and cakes, and they also sell delicious handmade marzipan candy.

According to Internet sources,  the origins of Tallinn date back to the 13th century, which makes Tallinn and its historic centre (or Old Town) genuinely old. There are beautiful, old buildings that have been restored, and some hotels are also located in very old buildings. For instance, the Three Sisters Hotel dates back to 1362. Originally there were three buildings owned by wealthy merchants, and later on they've been joined together and restored. Now the building functions as a five-star hotel.


All in all, we had a very nice time in Tallinn, and I can honestly recommend it to people who appreciate and look for more than cheap booze for their holiday. The Old Town is also small enough to manage on foot, which is why it is possible to wander around with children. In Finnish we have a saying "Matkailu avartaa", which means that travelling broadens your mind and gives you a new perspective to things. I have been to Tallinn a few times, and I must say that my view of this charming city has improved. Let's see when I will go there again! 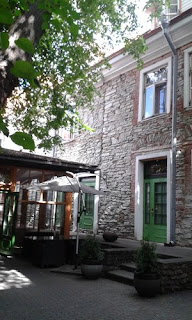 Visits to the site